Oil from the PDO Montoro-Adamuz, a source of health 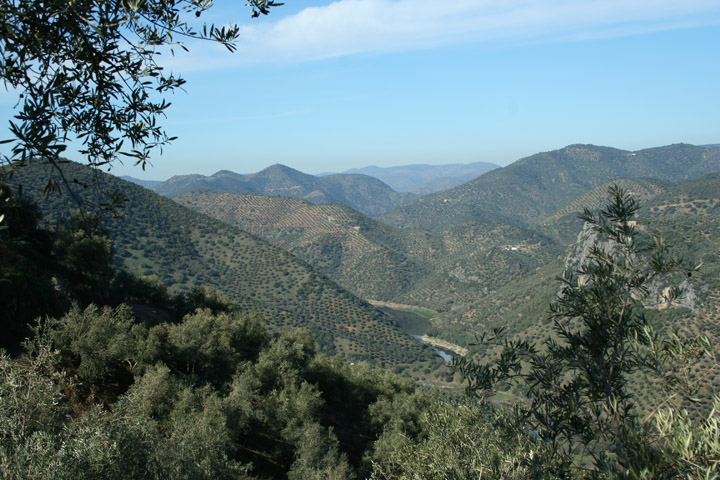 Benefits of Extra Virgin Olive Oil and its Polyphenols

The Protected Designation of Origin Montoro-Adamuz covers 55,000 hectares of olive groves situated in the Cordoban Sierra Morena. This hundred-year-old olive grove is famous for its quality and the great stability of its oils. Thanks to their high polyphenol content they have enjoyed historical prestige since time immemorial.

In Roman Times its oil was sent to Rome as part of what were then known as “oils from Baetica”, Baetica being one of the Roman regions. It was transported by water, along the Guadalquivir River. The oil mills of the Sierra de Adamuz y Montoro Mountain Range, which used beam presses and had their heyday in the nineteenth century, are one of the greatest industrial archaeological assets in the province of Cordoba.

The Sierra Morena olive grove is found in a practically unique location, in which the olive groves are integrated into a natural environment that has been excellently preserved through sustainable agricultural practices and using cultivation techniques that are traditional and environmentally-friendly as they try to prevent soil erosion with natural plant cover.

The Governing Board of the Designation of Origin is the Certification Body that is responsible for ensuring that the Montoro-Adamuz oil complies with all the quality requirements established in its Terms and Conditions Document.The olives can only come from olive groves located in the production area using sustainable cultivation practices and only from authorised varieties of olive.The oil can only be produced in authorised mills and under the most precise control of the beating temperatures, its natural decanting and its storage.The product must also be subjected to the strictest physical-chemical controls in accredited laboratories, with levels of polyphenols higher than 700, and reach a fruitiness greater than 4 in the organoleptic tasting chart.These requirements produce extra virgin olive oils of the highest quality, which will be sent to the market with the guarantee of their origin, endorsed by the logo from the Governing Board, exclusively in glass or tin containers that ensure its perfect state of preservation.

The oils from Montoro-Adamuz, produced from the Picual variety and the native Nevadillo Negro, are oils of great complexity from a sensory viewpoint and in terms of their aroma. Their positive attributes are the aromas of intense olive fruitiness and high green leaf, resulting in a delicious stock that is ideal for dressing salads and being drizzled onto toast as this reveals the “fruity” and “green leaf” attributes with the greatest intensity.They have lots of body, bitterness and sharpness, positive attributes that give them a sensory balance and a characteristic flavour. These come from the high content of polyphenols and natural antioxidant agents which act on the free radicals that lead to ageing.

Olive oil, as the main element of the Mediterranean Diet, gains prestige every day as a healthy food. Many scientific studies have found that a balanced diet rich in extra virgin olive oil reduces the risk of cardiovascular problems, lowers cholesterol, helps the functioning of the digestive system, fights diseases such as Alzheimer’s due to the presence of antioxidants, has excellent properties for bone development in infants and older people and potentially could have benefits in terms of preventing certain types of cancer.

In the workshops about “Oil and Health” held at the 16th Montoro Olive Tree Trade Fair, Dr. Manual Brenes from the Institute of Fats and Fat Derivatives in Seville presented the projects that have tried to demonstrate the antimicrobial activity of olive oil against pathogenic micro-organisms that cause food poisoning and against the bacteria that cause stomach ulcers and even the development of certain types of cancer.”Oils from Montoro-Adamuz were used in these studies, which demonstrated their bactericidal effect, even leading to the eradication of those pathogens”.

Dr. Brenes also presented the projects carried out over the last three seasons which have demonstrated “the high quantity of polyphenols in the oils from Montoro-Adamuz, with more than 1000 mg/Kg compared to other single variety oils whose average is around 400 mg/Kg”, or in other words “the levels of phenolic compounds in the oils from the Designation of Origin Montoro-Adamuz are triple the parameters of other oils”.

Fernando Lopez Segura from the Lipids Unit at the Reina Sofía Hospital in Cordoba explained the so-called Metabolic Syndrome or Obesity, a 21st century disease affecting around a third of the population.According to Dr. López, “In the past humans died from infections, violent death and hunger. However, in the past 60 or 70 years a new 21st century epidemic has appeared, namely atherosclerosis, the current cause of death for 40% of the population”.Cholesterol depends on your diet, differentiating within total cholesterol between LDL or “bad cholesterol”, HDL or “good cholesterol” and triglycerides.He says that “good cholesterol is the healthiest characteristic that a human being can have, it is capable of actually curing atherosclerosis, eliminating the bad cholesterol”

Dr. Montserrat Fitó from the Hospital del Mar explained the benefits of olive oil and its phenolic compounds, within the Mediterranean Diet, that make Spain one of the countries with the lowest mortality rate from heart attacks.She highlighted the studies conducted using the PREDIMED Study, and explained that “the beneficial effects of the Mediterranean diet have been attributed to its richness in antioxidants, phenolic compounds that prevent the oxidation of LDL particles, or bad cholesterol”

These studies were published in February 2013 in “The New England Journal of Medicine”, renowned among professionals as the best medicine journal in the world. They have possibly been the greatest contribution from our country to the world of health.

The project demonstrates that the continuous consumption of extra virgin olive oil keeps the optimum levels of antioxidant substances in the body (which prevent the ageing of internal tissues, keeping the circulatory system healthier and reducing the possibility of microlesions which may lead to cancer in the organs) and encourages the presence of “good” cholesterol at the expense of”bad”, so that veins and arteries do not become blocked (which causes high blood pressure and the possibility of clots leading to strokes and heart attacks).In short,it does not only say that it lowers cholesterol, it demonstrates that it leads to fewer heart attacks, less congestion in arteries and fewer deaths.

Demonstrating these results is very difficult and in fact the best newspaper in the world, the New York Times (NYT), has understood the importance of the project run by the Spanish specialists, led by Doctor Ramón Estruch from the Hospital Clínico in Barcelona.The project is, according to the NYT, massive and demonstrates that extra virgin olive oil reduces the risk of suffering from significant artery problems by 30%, a percentage that is equal to, if not greater than, that achieved by most medication that has been used so far in primary prevention.

We are sure that medicine will speak of the world before and after Predimed (as the project has been called). This is because although the association between the Mediterranean diet, including olive oil, and health has been analysed for a long time, never before has this link been categorically proven with an extensive study monitoring the benefits of these foods.

Moreover, few research projects are stopped earlier than planned because it is considered, with the data that is appearing, that the people assigned to the control group cannot ethically be kept without the benefits provided by the substance being studied. The Predimed had to be suspended ahead of time precisely because of that reason.

Today, extra virgin olive oil is accepted, recognised and recommended by the entire scientific community as a source of health benefits and recently the European Food Safety Agency has included it among the declarations of healthy foods. This makes the oils from the Designation of Origin Montoro-Adamuz the most beneficial to health, thanks to their high content of phenolic compounds.